Jebel Barkal a jewel in the Sudan desert 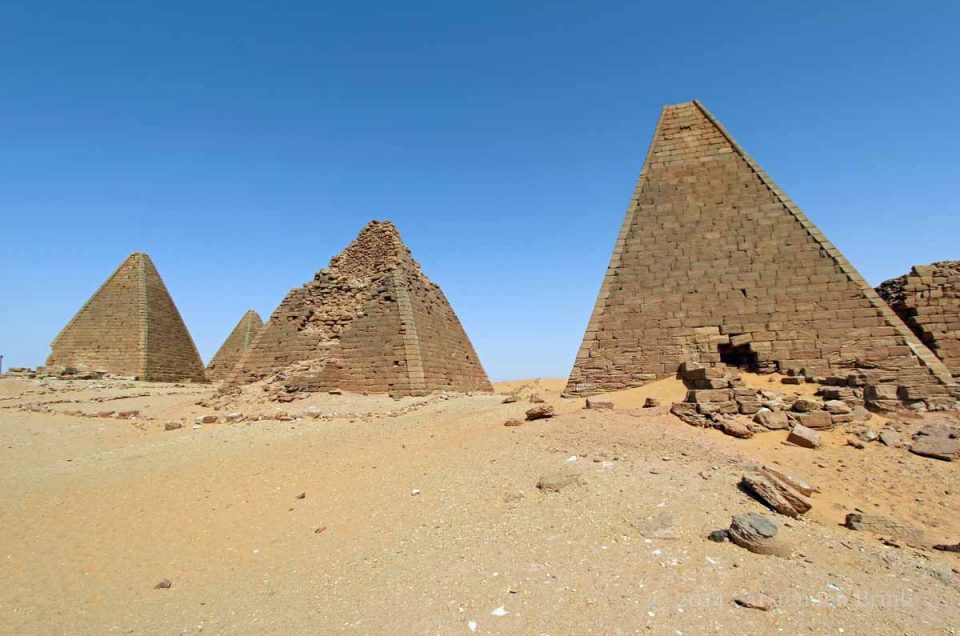 Jebel Barkal and the sites of the Napatan region of Sudan: Jebel Barkal, Kurru, Nuri, Sanam and Zuma cover an arid area considered part of Nubia on both sides of the Nile and testify to the Napatan (900 – 270 BC) and Meroitic ( 270 BC – 350 AD) of the second kingdom of Kush.

The sites and Jebel Barkar have been declared a World Heritage Site by UNESCO and include tombs, with and without pyramids, temples, mounds and chambers, housing complexes and palaces.

The pyramids, tombs, temples, palaces, mounds and burial chambers set in the border desert landscape on the banks of the Nile are unique in type and technique. The remains, with their art and inscriptions, are evidence of a great ancient culture that existed and flourished only in this region.

Jebel Barkar or Jebel Barkal, is the landmark of the Nubian desert, Jebel means mountain in Arabic and at the foot of this wonderful and isolated mountain of red sandstone, considered sacred since ancient times, there is a large temple, dedicated by the Pharaohs of the New Reign to their god Amun.

The Egyptians believed that the god Amun resided in this “sacred mountain” and it is for this reason that the larger temples, such as Amon Temple for example, were built at the foot of the hill and are still considered by the local population as sacred places.

The ancient “Pure Mountain” of Amun, the Olympus of the Nubians, was the religious heart of Nubia for more than 1000 years and today, together with the archaeological sites of the Napatan region, it has been declared a World Heritage Site by UNESCO.

In addition to the ruins of the great temple, there are still some statues depicting rams in granite that should have delimited a long avenue that probably led to the pier on the Nile.

On the mountain wall there is a large room decorated with bas-reliefs.

Most of the pyramids of Jebel Barkal are still preserved in their original shape and height while the reliefs and paintings on the walls of the temples and burial chambers are equally well preserved.

The pyramids, palaces, temples, burial chambers and funerary chapels of Jebel Barkal and the sites of the Napatan region and related reliefs, writings and painted scenes on the walls have been a masterpiece of great artistic value for more than 2000 years.

Visiting this remote area of ​​Sudan is a unique experience, a sort of mirage that comes to life in the middle of the desert.

Jebel Barkal a jewel in the Sudan desert