This 12-day trip to Sri Lanka allows you to visit both the archaeological and cultural sites of the country and to enjoy the beautiful nature of this fantastic island.

During the trip you will visit the UNESCO World Heritage archaeological site of Sigiriya with the ruins of an ancient palace, you will be enchanted by the beauty of Polonnaruwa, the ancient capital and of Dambulla with its incredible temples carved into the caves.

You will have the opportunity to visit the cities of Kandy and Colombo which are home to interesting temples and monuments.

Finally a bit of relaxation on the splendid beaches of Galle where you can observe the traditional wading fishermen. 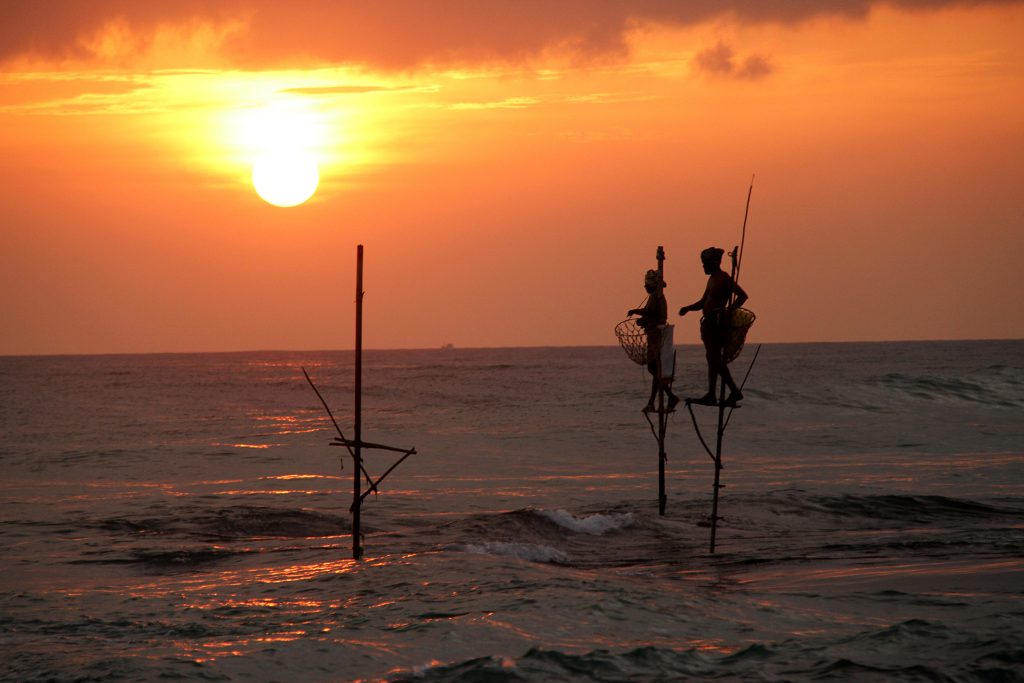 Visit of Sigiriya in Sri Lanka

Sigiriya, also known as Lion Rock, is a spectacular rock formation on top of which are the ruins of a fortified palace built by King Kasyapa.

The climb on the rock is fascinating and you can admire the wonderful frescoes that decorate the surfaces of the rock; it is believed that the frescoes occupied an area of ​​140 meters in length and 40 meters in height.

The entrance to the royal area takes place through a portal formed by two huge lion’s paws, today only the paws remain but it is believed that in the past the structure had the shape of a seated lion.

Visit of Dambulla in Sri Lanka

Dambulla is the largest of Sri Lanka’s cave temple sites, dating back to the 1st century BC. and contains over 150 Buddha images, lightly lit to create the magical atmosphere.

A series of five caves, most of which have been hewn by hand and some of the incredible series of Buddha statues are still embedded in the rock.

The magic of Dambulla lies in its mystical atmosphere, the monks dressed in orange robes silently parade among the tourists and the effigies of the Buddha seem to smile and bless those present.

Polonnaruwa a medieval city, a UNESCO heritage site, is the old capital, it has well-preserved monuments that provide clear evidence of the glory of Sri Lanka’s past.

Among the most important monuments is the Royal Palace complex including the Royal Palace and the Audience Hall, the spectacular Gal Vihare complex of four huge Buddha images, carved from a single granite slab.

Here are also some of the best examples of Hindu influence: the temples of Shiva, the intricate statues of the Hindu gods, the fascinating Buddhist temples, the Lankatileka and Watadage, the Galpotha, the lotus bath, the Kiri Vihare Dagoba and the remains of a former temple are other impressive sights.

Yala National Park is the most famous park in Sri Lanka thanks to a spectacular landscape overlooking the ocean and above all for the high concentration of wild animals.

Yala National Park is the protected area with the highest concentration of leopards in the world, and protects numerous animal species including Indian buffalo, elephants, crocodiles, wild boars and deer are the most common animals in the park.

There are many ornithological varieties such as the blue peacock with its fascinating plumage and the Indian tantalus belonging to the stork species.

The territory of Yala has areas of savannah similar to that of Africa, marshes and lakes infested with crocodiles, long ocean beaches and dense forests.

The period of tropical cyclones, which bring heavy rain and wind, runs from April to December, with two peaks in May and November.

Sri Lanka is characterized by a tropical climate, hot and humid all year round, but the best times to visit the country are February and March.

Camera and binoculars for safaris; sunscreen, sunglasses and snorkeling equipment for the sea area.

To enter the temples it is necessary to take off your shoes and dress respectfully so no too deep necklines or clothing considered “extravagant”.

PDF Button
from 1.280 euro
Per Person
Share this tour