A 12-day journey through the most remote places of Ghana, Togo and Benin to discover a tribal world still guided today by the spirits of the ancestors, and by voodoo rituals.

The journey begins at Lome, the capital of Togo, here is one of the largest fetish markets, a very interesting place to visit.

We continue along the coast and reach Benin, the heart of the voodoo cult, where the priests of the cult meet and we can watch the ceremonial dances that culminate in a state of trance; Voodoo spirits exert a great influence on their followers.

The sacred place where the Dankoli fetish is located is an important place of voodoo worship, here the faithful come to pray and ask for a blessing for the crops, for love and for the family.

Moving inland and North we meet the Taneka, a population led by feticheur and curious kings; the Tamberma and their splendid fortified houses.

We enter Togo and visit the Somba, they too build beautiful fortified houses; the journey continues to discover the Togolese populations: the Kabye and Kotukuli and we can watch the fire dance of the latter.

From here we continue to Ghana and we will reach Kumasi the capital of the golden kingdom of the Ashanti, here the king of the Ashanti still lives today, who plays an important role in the country’s politics; we can visit the royal palace, one of Africa’s largest local markets and, if we are lucky, we can attend the celebration of an Ashanti funeral.

The journey ends on the coast of Ghana, the former Slave Coast where there are several forts used during the slave trade, testimony of a very sad past.

Certainly one of the most exciting and spectacular trips to West Africa, a varied itinerary full of interesting places to discover.

An incredible experience, places so far away from us and, for this reason, extremely fascinating.

Visit to Lomé in Togo

At Lomé, the vibrant capital of Togo, we can admire the colonial buildings of the administrative district, where the flavor of the past still lingers; the fetish market, where a huge and eclectic assortment of everything necessary for love potions is sold, as well as magical concoctions for the most varied uses.

Not far from the capital, at a village lost among the high grasses of the savannah, at least three generations of adepts celebrate Voodoo ceremonies; we will witness the ceremony at the ever more hypnotic rhythm of the drums and the sound of enchanting songs, during the dance some dancers will fall into a deep trance: overturned eyes, grimaces, muscle tension, insensitivity to pain or fire.

In this place surrounded by the atmosphere of the Voodoo celebrations, we will have the opportunity to learn the mysteries of this ancient religion.

Visit to Ouidah in Benin

Ouidah is a quiet town that was once conquered by the Dahomey army in the eighteenth century and was later transformed into a terminal for the slave trade.

At Ouidah there are beautiful examples of Afro-Portuguese architecture, nice inhabitants with a smile always ready and a relaxed attitude, the sound of the waves coming from the beach, the rhythm of the drums create an atmosphere out of time.

Here we can visit the temple of the Python, one of the most sacred places for Voodoo adepts, and the Portuguese Fort, that has been transformed into an interesting museum on the slave trade.

The visit to the city ends by following the slave route that reaches the beach, where the slaves were embarked, without the possibility of returning, to the New World; along the street of the slaves there are a series of statues and buildings that mark all the stages of the path that the slaves took, from the place where the auction took place where they were sold to the beach where the ships were located, going along it is really a touching experience.

Ganvie is a beautiful and extensive stilts village located not far from Ouidah in Benin.

On board a large pirogue, we sail through the waters of Lake Nokwe until we reach the village belonging to the Tofinou tribe who build their houses on teak poles, that are planted on the bottom of the lake, and cover the roofs of the houses with a thick straw blanket or, in more recent times, with metal sheet.

Fishing is the main activity of this population whose isolation has allowed them to preserve the habits and rules of the past.

Everyday life takes place on the pirogues, that men, women and children conduct with ease, with the help of long poles.

It is on the pirogue that one goes fishing, moves, sings along with the rhythm of the poles; moreover, on pirogues, women put on display the goods to be sold at the market and the children go to play and go to school. 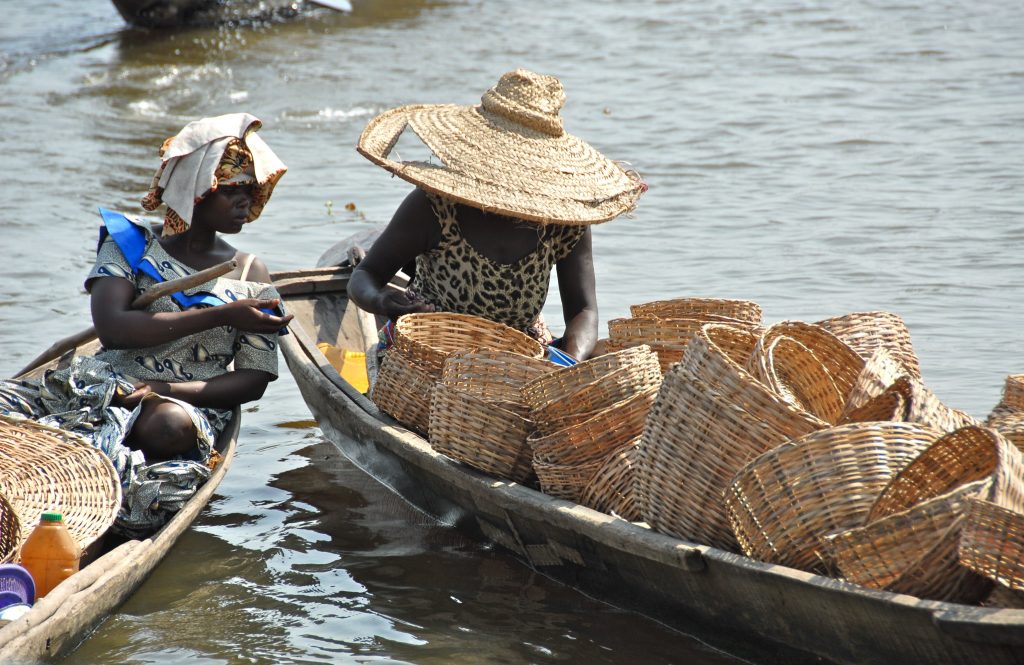 Visit to Abomey in Benin

Abomey was the capital of the powerful Kingdom of Dahomey, here is the huge royal palace, whose walls are decorated with the symbols of the ancient Dahomey kings.

Originally the palace was much larger than we see it today, now it is a museum declared a World Heritage Site by UNESCO; among other things, it preserves the mortal remains of kings, thrones, ancient altars of worship, statues and weapons.

The kingdom of Dahomey based its economy on the slave trade, in fact the permanent state of war in which the kingdom was located allowed the king to capture thousands of prisoners who were subsequently sold as slaves to European traders in exchange for weapons.

At the center of the royal court stands a temple built using a mixture of clay and human blood, probably the blood of enemies who died in battle.

Walking through the buildings, the visitor can admire the ancient splendor of the Dahomey court, who proudly challenged even the powerful Western armies who came here to colonize the African continent.

The territory of the Somba in Benin and the Tamberma in Togo is characterized by rolling hills and plateaus dotted with incredible fortified houses, similar in shape to our medieval castles, even if they are smaller in size; these houses represent one of the most beautiful examples of ancient African architecture.

The Somba and the Tamberma are proud followers of ancient traditions and this is demonstrated by the presence of small phallic-shaped sanctuaries located in front of the entrance to the houses.

If the inhabitants grant permission, we can enter the houses to better understand the lifestyle of the Somba and the Tamberma.

In reality the houses are an anthropological and cosmological representation: the first floor, wrapped in darkness, represents death and is the place dedicated to the ancestors, the second floor, with the sky open, represents life and it is the place where women look after the young ones and where the cereals are put to dry.

All food and animals are kept inside the houses, in order to guarantee the survival of the family group in the event of an enemy attack.

For centuries, these populations have exploited the difficult access to their territories, offered by the Atakora mountain range, to defend themselves from slave traders.

The area has been declared a World Heritage Site by UNESCO.

Visit to Kumasi in Ghana

Kumasi was the capital and spiritual center of the ancient Ashanti Kingdom.

The Ashanti gave birth to one of the most powerful kingdoms in Africa that reigned until the end of the nineteenth century, when the British decided to annex it to their colony that at the time was called the Gold Coast.

The honors that, still today, are rendered to Asantehene, the king, testify to the past splendor and power of the Ashanti.

Today Kumasi, with about 1 million inhabitants, is a teeming city with a fantastic central market, one of the largest in Africa.

If possible we can attend a traditional Ashanti funeral, during which the participants, as a sign of mourning, wear enchanting red or black robes.

It is a funeral in all respects, but with a very joyful atmosphere; the deceased is considered still present and part of the family; friends and relatives together socialize and honor his memory.

The leaders, in the shade of large colored parasols, participate in these celebrations surrounded by the whole courtyard, by the rhythms of the drums and by the dancers who dance with movements rich in gestures and symbolism. 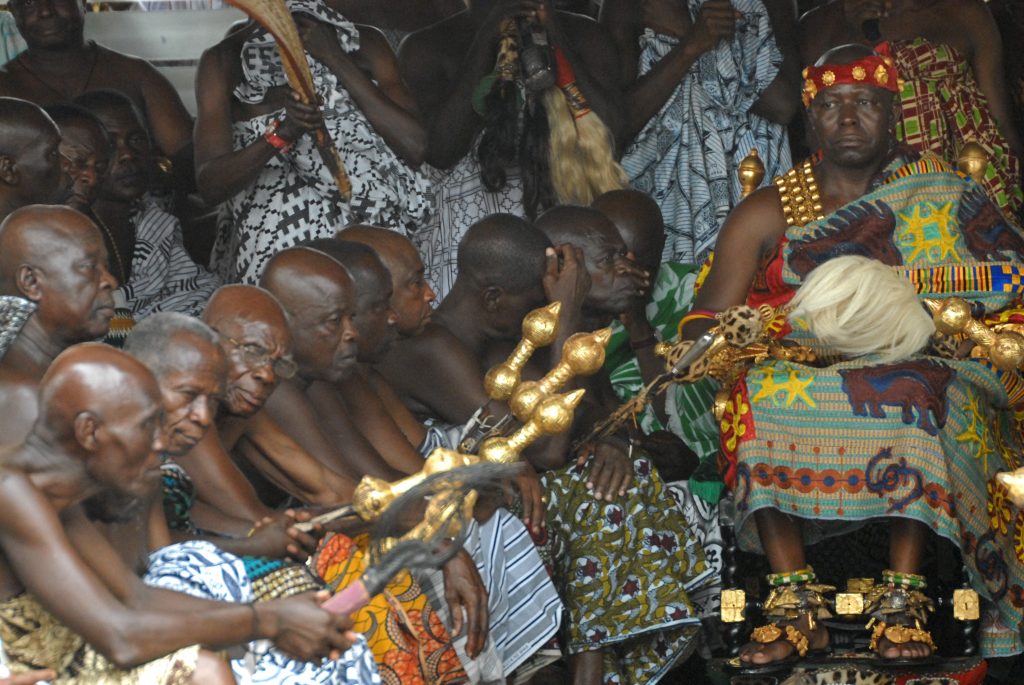 Visit to the Elmina Castle in Ghana

The Elmina Castle is one of the oldest in Africa; the Portuguese built it in the 15th century.

In the past this castle took on more than one main role at different times in its history; in fact, it has been an harbour, a base for the trade in gold, ivory and finally for the slave trade.

Outside the walls of the Elmina Castle, there is a wonderful fishing village with a small port always full of colorful pirogues.

Every day, conducted by expert fishermen who obtain their livelihood in this way, the pirogues face the hard ocean.

The alleys of the old city are immersed in a lively atmosphere that takes us back to the time when Elmina was a lively colonial town.

The three countries have a tropical climate with a dry season and a rainy season.

The best time to visit Ghana is winter, from December to February, because it is the driest and sunniest period, in the North the torrid temperatures are mitigated by Harmattan, a wind called “the doctor”.

The best time to visit Togo is from November to January: the air is dry and the weather is generally good.

Even for Benin the best time is from November to January.

This 9-day trip allows you to discover Ethiopia, one of the most fascinating countries on the African continent and that presents an incredible cultural and geographical diversity. Traveling South, starting from the capital Addis Abeba, you have the opportunity to […] 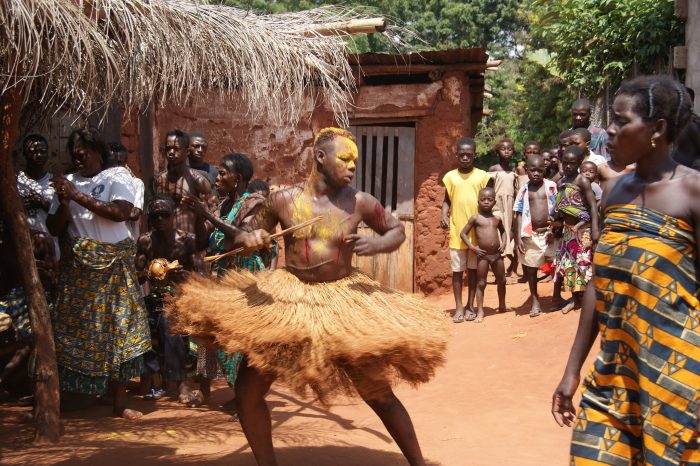 Benin is a West African state rich in traditions and ancient ceremonies, the state religion is voodoo and January 10 is a special day during which the population celebrates ancestral cults, in particular all the voodoo adepts gather in the […] 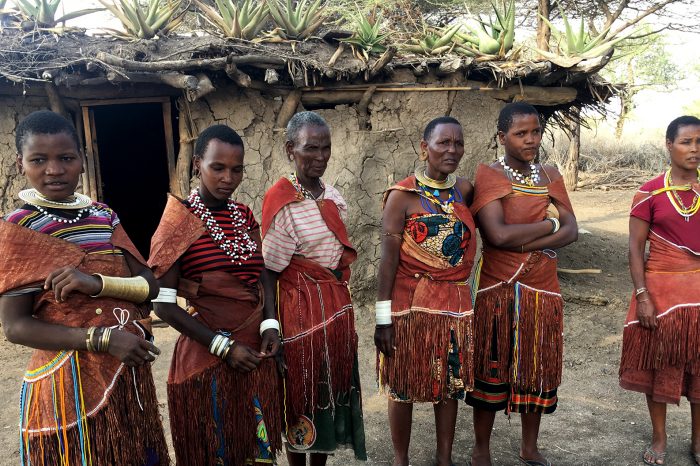 Tanzania is a very diverse country and hosts many interesting areas for those who want to visit it, here there are in fact many national parks and conservation areas, lakes, mountains and volcanoes, savannahs and forests, a hospitable and friendly […]

A 9-day itinerary, partly away from the country’s classic tourist routes, that will allow you to grasp the true essence of Kenya, an unusual journey that will excite you! Some places in Kenya are still authentic, wild and unique for […]